Skip to content
November 20, 2011 Mona Alvarado Frazier
Every year the window for Thanksgiving Day shortens. Philosophically, we can say that thanks giving should be every day and that is something to strive for but if we talk just about the holiday, wouldn’t you agree that it has shrunk to a blip between Halloween candy and Christmas trees, with a short layover on Black Friday? 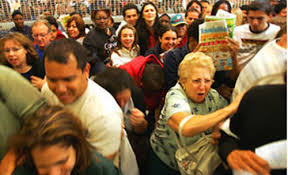 When I reach back into my childhood, Thanksgiving began a week before the day and ended when we returned to school after the holiday. During the week before, we drew pictures in class, learned what American history said about Thanksgiving, wrote essays and went to Mass.
On the day of Thanksgiving, I remember the knock on the back porch and finding a cardboard box filled with a cold whole chicken, apples, cans of green beans, a sack of flour, and potatoes. My mom looked relieved and the rest of us wondered who put the box at our door. Our holiday began that way for several years when we lived on Felicia Court in the projects. Between the neighbors and relatives, there were plenty of vegetables but they tasted so much better with roast chicken. I don’t remember anything other than the aromas, the family, and our artistic renderings of turkeys and pilgrims stuck on the refrigerator door.

By the time I was ten, I didn’t want to open the back door when I heard a knock on Thanksgiving Day. I was embarrassed. The next year my mom went to the church to pick up a food basket the night before. The next year she was able to buy her own chicken. After that, we moved up to Rose Park and we began celebrating the day at the relative who had a house, not a small apartment. That’s when I remember the noisiness and laughter of extended family, playing with cousins, sneaking more pie, and the energy from the festivities.
Once we had our own families, our holiday began after work on Wednesday night and ended with collapsing on the couch for the weekend. We alternated between homes, shared the cooking and the leftovers. Now it was whether using foil, butter, or oil was better for the moistest turkey, or which pie was the best. We ended the day with a family basketball game. If you could pick up a ball, you played. And that’s the way it was for several years—a solid ritual.
The plan this year was for my siblings in Ventura County to pack up the families and celebrate Thanksgiving in Fresno with my sister. My mom has been there since Halloween and we were to bring her back after Thanksgiving. You know what happens with the best-laid plans.
This year the holiday shrunk so severely, that our Thanksgiving Day plans are in the air. Two of my three kids are working on Black Friday, the day before turkey day, one at 8 p.m and the other at midnight. Since our time together shriveled to a few hours, I decided that our family would go out to a restaurant to celebrate. That’s been my secret wish for many years.
Now my brother’s kids want him to stay in VC. Yesterday, my sister had a major unplanned expense she can’t go to Fresno either. This is the first time in our life that we may spend Thanksgiving Day without my mother. I get a lump in my throat when I think about it. Leave my kids here in VC and go to Fresno or not? And what if my mom’s not around for next Thanksgiving? The questions whirl around me and my feelings bounce around in my chest.

Since I can remember, Thanksgiving Day was spent with family and that’s what it is about, not the chicken or the turkey, not whose house we visited, or what game we played.


What if my family goes to Fresno on a Wednesday morning and comes back Thursday afternoon? Or the weekend? That might work, because maybe thanks giving day is any day we choose.