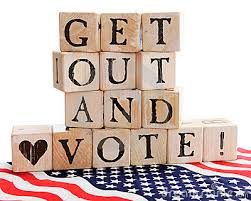 To be more accurate, the title of this post should read “Why my mother and former mother in law still vote and my son won’t,” but that is too long of a title.
A couple of weeks ago the deadline to register to vote passed. My nineteen year old didn’t register. I was more than a little miffed. Doesn’t he know that it’s a privilege to vote, is he lazy, doesn’t he care? I waited to ask him these questions until l could ask without biting his head off.
His reasons:

My vote doesn’t count…it’s a corrupt system… I don’t believe in either candidate.

I didn’t want to debate each reason. It’s too late for this year. But I couldn’t let this issue go without a few words (okay, more than a few). So this is what I said:
Your 75 and 85-year-old nana’s (grandmothers) vote. Nana Maria, is legally blind and although it takes a couple of days and help to go through the entire ballot, she votes. Nana Catalina is an ongoing presence on Facebook, diligently advocating for Obama. They both feel voting is a privilege and an opportunity. Nana Maria grew up during the depression. She vividly remembers food lines, the attack on Pearl Harbor, air raid drills, segregation, migrant work, marching with Cesar Chavez, and voter registration. Nana Catalina lived through most of the same era’s. In 1968 her husband and other parents sued the school district over its policy of segregation. The case went to the US Supreme Court. They won. Both grandma’s are strong women, bien chingonas.

Both of them recognize that other men and women fought for a vote and that fight was not easy. They’ve seen and felt corruption. Yes, some decisions made by certain U.S. Presidents disappointed them but they believed that their vote counted. Your grandfathers, rest their souls, voted, and your parents vote. So what makes you so indifferent? Is it because you have grown up in an era pelted by twenty-four hour news of corruption, violence, and war around the world which has quashed belief in a better world. Is that why you have a “glass is half empty” perspective, or is it that you believe a cause is futile when you don’t get the outcome that you want? Was it my parenting? Your reasons are confusing to me. You believe in protecting the environment, animal rights, and the golden rule. You’re a committed vegan for crying out loud. I don’t know the reason you didn’t register to vote or why only 62% of male young adults your age registered to vote in the 2008 election. Maybe it’s because you haven’t struggled, economically or socially.You haven’t lived in poverty, worked at hard labor, or encountered blatant racism. Are those the reasons? That did get a very slight nod and “maybe,” from you. Perhaps I should have shared this quote with you years ago:

Your older brother votes and he’s much more cynical than you are-in all honesty. He says teens your age don’t know or take time to know the issues and how they affect your future. I don’t know if that’s true. You know so much more about global warming, GMO’s, and nutrition than I do. You have studied issues before.
Maybe contemporary life has sucked hope from your horizon, maybe you don’t have faith in the voting system-many don’t. I’m not saying you’re wrong for feeling the way that you do. I’m trying to understand your reasons for not registering to vote. I’m trying to have you understand why others do vote.
I want you, and the other 48 % of non registered voters your age, to care enough to do something about a system you believe is corrupt or broken. I want you to know the gumption your grandmother’s still have at their age. I want you to care enough to utilize the power of a vote.

I don’t know if anything I said this morning changed your mind or not. Bottom line is that by not participating in your right to vote, you will have to live with the consequences of decisions made by others.

I so want you to understand that amid your feelings about the condition of the world and our U.S. society that things can get better.