This summer, my household budget was as tight as our governments. That did not stop me from visiting cities abroad, smell exotic foods, or immerse myself (albeit briefly) into the language and culture of other regions. I made my summer trips via books, plunging myself in the sounds, senses, and languages of other cultures and regions.

As usual, I prefer to read about women protagonists’ who face obstacles and become or are strong women. I purchased all of these books, except for “The 228 Legacy,” which I read on NetGalley.*

The exotic, chaotic, and vibrant characters in “The Woman Who Fell From the Sky: An American Journalist in Yemen” by Jennifer Steil was tantalizing. The 354 page novel is from Random House/Broadway. This is the kind of memoir I love to read.

The author was 37 years old when she left  New York as a successful journalist and accepted a three week assignment teaching wanna be reporters for a small Yemen newspaper in Sana’e.

The  novel  is fascinating, humorous, and sometimes frustrating. The authors three weeks ends up being a one year assignment with reporters who have their own ideas of writing news. She shows us Yemen, its food, culture, and language through her anecdotes and relationships with the reporters. More importantly, the story is a great read about women, gender roles, and society.

What captured me was the authors full characterizations of the news staff. The men often committed loutish behavior, but she also balanced this with their cultural mores. The women reporters especially fascinated me with their intelligence, struggles, and persistence. The pacing is quick, the setting colorful, and the writer keeps the readers attention.

Jennifer Steil was somewhat derided in book reviews because she shares her personal relationship with the married British Ambassador. There are perhaps five pages interspersed at the last quarter of the 332 page book. The romance is not a central theme in the book although it’s given much attention by some reviewers. The Ambassador is  now her husband. The title of her upcoming novel is, “The Ambassador’s Wife.” This book is on my TBR list.

Now back to the United States, in Kansas CIty, Missouri. “Every Last Secret,” (McMillian/Minotaur) a 300 page mystery novel by Linda Rodriguez, took me into the world of Detective Marquitta “Skeet” Bannion, an intelligent, savvy,  half Cherokee woman who has a heart for those treated unjustly.

Police work is not an unknown world to me, as I spent 28 years working with law enforcement so the protagonist, Detective Bannion, was particularly captivating because she dealt with many issues  women face in law enforcement, particularly women of color. She does this without overreaching or whining. I did want to read more about her friends and how she related to them so I’d get more of a full picture of her as a character.

Someone murdered the student news editor in chief who was facing sexual assault and theft charges. The university politics cause many crimps in solving the mystery, but it does intrigue. The novelist takes the reader on a twist and turn through several suspects and just as many murders. This happens amid the interruptions of her jealous ex-cop husband and her father, a disgraced alcoholic ex-cop father.

This was the first mystery I’ve read in many years as it’s not my genre, however, what drew me to this novel was the female protagonist in law enforcement and how she dealt with her job and personal life. “Every Last Secret,” won the Malice Domestic Best First Traditional Mystery Novel Competition. Ms Rodriguez second novel, “Every Broken Trust,” is now available. 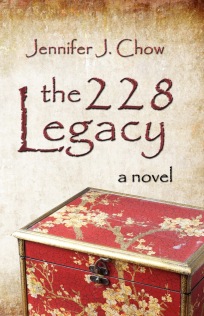 Now onto Taiwan with debut author, Jennifer J. Chow’s book,  “The 228 Legacy,” published by Martin Sisters, 324 pages. Three generations in an all-female Taiwanese family living near Los Angeles in 1980 gives us a multigenerational view of their life. The grandmother has breast cancer, the daughter loses her job, and granddaughter, Abbey, has several struggles including bullying.

I’m a fan of historical fiction and the story elements of significant historical events, immigrant experiences, second and third generational issues, and mother daughter relationships made this novel interesting to me although there were many themes to follow.

The character I grew to care about the most was Abbey and Jack, the elderly man in the story. Sometimes 10 year old Abbey’s reactions to situations didn’t seem appropriate but she was likable and interesting.

The 228 Massacre was an uprising of the Taiwanese people against Chinese rule of occupied Taiwan following World War II. It is a sensitive event which has significantly influenced Taiwan’s politics and nationalism. The memory of this massacre and how it influences three generations of family is at the crux of “The 228 Legacy.”

“The Space Between Us,” by Thrity Umrigar is a 321 page novel published by Harper Collins. The novel is the story of two women in Bombay, one is the servant, one is the mistress of the household: the privileged and the powerless. Each of their lives is examined through the events that occur in their relationship.

The richness of this culture, the differences in classes, and the male and female gender roles fascinated me. The main characters are given full dimension and you neither love or hate them, but understand their motivations. The reader ends up caring for most of the characters. The scenes are fast paced when they need to be and loving rendered to establish locale and atmosphere.

The novel highlights injustice through scenes and plays them out to ends the reader may not like. The ending was abrupt for me. It didn’t like it until I realized that this reality would have the ending be that way. It’s not a warm fuzzy ending, but I can appreciate the experience. Ms. Umrigar is the author of four other novels.

The book contains an author interview, features, and “Words to the Wise Would Be Writer-15 tips.” I was inspired by her suggestions.

My fall reading list takes me from the Southwest US to Paris and India with Count on Me, Tales of Sisterhood, by Las Comadres Para Las Americas; Trapped in Paris by Evelyne Holingue; The Lowland by Jhumpa Lahiri and Mañana Means Heaven, by Tim Hernandez.

*No agreements or exchanges made for any favorable reviews. I don’t give the books “stars” or points. For any numeric ratings you can read my reviews on Goodreads or Amazon. (For some unknown reason my GoodReads widget is in error and not showing the books on the shelf).