Last month I posted a clip of a theatrical short directed by Lucy Rodriguez-Hanley. The short is based on a story “The Big Deal,” by author Michele Serros from her book “How to be a Chicana Role Model.” We find out what happens when Michele brings home her agnostic, vegan boyfriend to meet her Catholic, meat eating familia.

The film played at various independent film festivals in Austin, Ventura, and Los Angeles. The short was nominated for an Imagen Award and last night it won the award for Best Theatrical Short. Congratulations Lucy and all those who made the film possible, including Michele Serros, author of “How to Be a Chicana Role Model,” and whose story you adapted to film.

I’m including Lucy’s quote after she won the award:


“I am beyond words right now. All I can say is follow your dreams – I’m following mine and it feels great.
I met so many inspirational people tonight.  I share this award with my friends, family, the cast, the crew, my Mateo and my Chicana Role Model, Michele Serros.

Now back to work on preproduction for The Brown Widow and Alone. 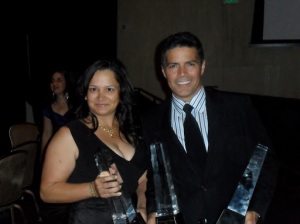 You can follow Lucy’s blog to keep up with all of her projects. Sorry I don’t know the name of the handsome man next to her, but I sure do recognize him.

I’m especially proud to see a young Latina ( it can be a more mature one too), take on screenwriting, directing and producing films which broaden the scope of  Latinos in film. We aren’t a single issue, one dimensional gente, so when filmmakers show our diversity in skin color, careers, generational issues, customs, language, et al,  that contributes to a better understanding of Latinos.

Congratulations and ajua to all involved.