Skip to content
September 29, 2011 Mona Alvarado Frazier
The Kickstarter campaign to raise money to complete the documentary “Cesar’s Last Fast,” began on September 25, 2011. Last week’s article discussed some of the reasons why filmmaker Richard Perez decided to make the film. This article explains why the film is important and how you, the community, can help complete the film and carry it to small and large screens everywhere.
People who grew up in the 60’s-80’s remember the boycotts, chants of huelga and numerous discussions about social justice. My mother and I participated in boycotts and she attended César’s funeral because “…he was a great man, like a good friend…” 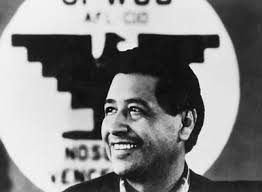 But do our children know of this time in history. Do they know the reasons for the boycotts, UFW, or the man behind an historic social cause? Will they ever feel the stir of César’s words, the emotion behind the 36-day fast, the marches, the huelga flag? Give them the opportunity to see this film, because after they see it they will not only know the reasons, they will feel the emotion and understand the need to continue advocating for social justice.
The film opens with original footage of Chavez’s funeral. It continues with his organizing efforts in 1965 when he and his supporters stood on dirt roads encouraging fieldworkers to join their cause and the actions of those who opposed him and assaulted UFW supporters. The lump in my throat grew as I watched the human drama unfold and heard the speeches Chavez gave to his supporters while in the midst of difficulties. The scenes are poignant and stirring, not only for what is actually occurring on screen and what took place in real life, but because of the universal resonance of justice, integrity, and a man’s belief in “…one dream, one goal, one vision…”
In my interview with the director, Mr. Perez, it is evident that “Cesar’s Last Stand” is more than just a film. His mission is to utilize the documentary as a powerful tool to engage people and organizations to participate in social justice movements using Cesar Chavez’s inspiring story as a model for how individuals and communities can address the inequities they confront every day.
The website explains this further, “To carry out this social impact initiative, the filmmakers will partner with national civil, labor, human rights, and faith-based organizations. These partner groups will organize community-based screening. This strategy will ensure the film reaches a new generation of immigrant workers who may not know Chavez’s story and his impact on Latino civil and labor rights in the United States.”
All of the money raised from this campaign is for the completion of the production of Cesar’s Last Fast. This project will only be funded if at least $21,000 is pledged by November 24, 2011. The filmmakers will travel to California’s Central Valley to interview farm workers in the fields and in their homes and capture the conditions under which they work and live. The target date to complete the film is early Spring, 2012.
After that, a series of community-based screenings are scheduled to reach the audience who most needs to see this film: today’s generation of farmworkers, workers in other low-wage industries, and young people who came of age after the historic rise of the farmworker movement and Cesar Chavez’s passing.
Support levels range from $1 to $1,000. Recognition ranges from acknowledgement on Facebook to receipt of a special edition DVD all the way up to on-screen Associate Producer credits.
Taking part in a social justice campaign is only a click and a few dollars away.