Hello to the third day of the A to Z Challenge. Today’s letter is C and C is for “CHANCLA.”

Chancla is the deadliest word of the alphabet for those who grew up in a Mexican or Latino household.

A chancla looks benign, especially when on the foot. The word means flip-flop or slipper or sandal. If the chancla can easily slip off,  fly in the air and hit a target in one swoop, it’s a chancla.

In our house, it was a one size fits all tool of discipline.

There were warnings before the removal and use of the chancla:

1-The narrowing of Mom’s eye’s as she spied one of us acting up. You could escape or stop misbehaving.

2-The slight bend of the body to the right which meant she was reaching for the chancla. You can still escape or say ‘okay, I’ll stop.’

3-The swift removal of the chancla, thumb on the heel, sometimes a twirl before a blur of chancla flew through the air and hit its target. Usually one’s head, shoulder, or back. You’re a world-class runner if you escape during the execution of the third step. 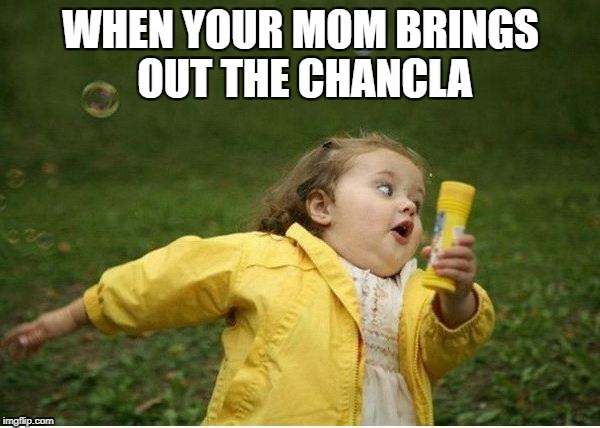 Everyone I knew had a chancla wielding mom or grandma and no one thought they were being abused. Most of the time a kid didn’t pass number two above, “the bend” before they stopped misbehaving.

The chancla brandished by a mom was preferable to what a dad would employ, another C word, the cinturon (belt).

To make it super easy for one to understand the power of the chancla, and its widespread fame here’s a video about La Chancla

Many younger Hispanic households do not endorse the use of the chancla, for the reasons listed here.

I don’t endorse or not endorse the chancla, it was a reality in my household and used sparingly. And by sparingly I mean I outran the flying chancla most of the time.

2 thoughts on “A to Z Blogging Challenge: C is for Chancla”