It’s officially the Dia De Los Muertos, a remembrance of all our loved ones who have passed onto another world. As Chief Seattle says:

There is no death, only a change of worlds

If this day is new to you, the best way for you and your children to experience the tradition is to attend an event this weekend. Talk about the meaning of this day and that it is okay to talk about the deceased. There are so many memories parents may have of their parents, uncles, aunts, best friends, grandparents or great grandparents.

And one of the second best ways is through storybooks, like the one above. I just read about this book this morning and visited the author/illustrator’s site: Muertoons. I’m their newest fan.

The vibrant illustrations of ROSITA Y CONCHITA and the sweetness of the story make this storybook a keeper. Encourage children to talk about their losses, their memories. Listen to their stories.

And if you can’t make it to an outdoor celebration, you can always light a candle by a favorite photo of your loved ones who’ve passed, listen to their favorite songs, give them a toast, and let them know you remember them-always.

Have an enjoyable weekend.

Right after the candy and costumes of Halloween, we have the celebration of Dia De Los Muertos, the Day of the Dead (DoD).

This is an ancient tradition which has been reintroduced into the United States in the 1990’s.

I am the second generation Mexican American. The DoD celebration was not part of my childhood or young adult years. The kids in my barrio went across town, to the North side, to go Trick or Treating. We did not stay home and build altars, make sugar skulls or bake pan de Muerto.

Well, I take that back. Most of the homes in our neighborhood had little altars in the living room or in the front yard, but they housed the Virgen de Guadalupe, or a saint, some small candles, and maybe a memorial card of a loved one.

As a full out celebration, the DoD was not practiced much in the ’60’s and 70’s the USA. But it has found an additional home with Hispanic and non-Hispanic millennials. I’d venture to say it’s now practiced by many Latino baby boomers and Gen X’s. In fact, I’m attending my sixth DofD celebration, this time at our county museum.

This infographic by GolinHarris on the Traveling Latina site gives an eye-opening look into the “new” old celebration.

So for those who have not attended a DoD fest, here’s a guide to have your own celebration:

10 Must Have Items for Dia De Los Muertos

Now that you know the meaning of Dia De Los Muertos, go and celebrate your loved ones. 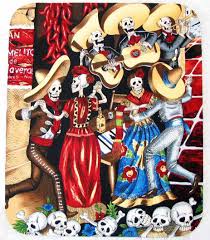 Feliz Day of All Souls or Dia De Los Muertos (DDLM). The last two days have been a whirlwind that rivals the 75 degree Southern California Santa Ana winds that we have today. I began NaNoWriMo on November 1st, while getting my micro mini bookstore, The BookNook, ready for opening this afternoon. The last week has been dedicated to unpacking books, retail labels, printing bookmarkers, and all that kind of stuff.

I had the nerve to take off to Los Angeles yesterday evening to catch “Come Fly Away With Me,” at the Pantages, in a quest to relax before opening day.  Ten minutes before the curtain rose I received a text that my cake pop treats would not be ready for me today after all, ‘so sorry.’ There was a problem at their bakery. I moaned and groaned (not in the text), said a prayer and began searching for other bakery numbers. Everyone was closed for the evening. Curtain rose, the musical was non-stop dancing to Frank Sinatra songs and I was taken away for 80 brief minutes. Turned my phone back on and a sweet mini-miracle, the bakery texted, everything fixed, your order will be ready.

I call the BookNook micro-mini because it is within a consignment shop, very nice, where I rent a small space for new and ‘gently read’ books. At the shop today is a DDLM commemoration and local artists will build an altar within the store for the community. People are free to bring candles, sugar skulls, marigolds, papel picado and Pan de Huevo.

Before I take my crates of books to the car, double check on my cake pops, and gather up my equipment I thought I’d post some references from my favorite sites on “Character” building for those who are interested in using this information for their NNWM challenge. (I’m already behind with only 1,643 words, but there are 28 days left).

Writer’s Digest did a good job on How to avoid Parenting your Characters. If you haven’t visited Holly Lisle  blog now is a good time to follow her and pick up some valuable pointers. IMHO she has one of the most helpful blogs for writers. Over at Kirsten Lamb, who is also a wealth of information and who collaborates with many authors to provide great info, is her article for creating legendary characters.

After my bookstore opening I hope to come back and do some more NNWM words. But in between what I hope are many customers, I will be over at the DDLM altar saying some prayers for the departed and enjoying some Pan De Huevo.

Like Loading...
October 27, 2011 AlvaradoFrazier
The first of November begins the Day of the Dead (Dia de los Muertos) festivities. Its roots can be traced back to indigenous cultures. The Aztecs had a celebration in the ninth month of their calendar with a celebration to their goddess Mictecacihuatl, the “Lady of the Dead,” later depicted as La Catarina. Souls did not die they rested in Mictlan.
After the Spaniards colonized Mexico, they moved the celebration to coincide with the Catholic All Saints Day and All Soul’s Day. These holy days originated to honor and remember deceased children and All Souls Day on November 2, is for the remembrance of adults. The Aztec ancestral tradition then blended with Catholicism to create a special time and space to remember and honor the loved ones.
The day is not meant to be scary or somber although the symbol of the day is the skull or calavera. It is a time of remembrance, of honoring those who passed, and of revisiting memories. For many people this is a time of healing with tears, laughter, stories and music. The traditions and activities that take place in the celebration of the DoD are not universal and often vary from town to town.
Day of the Dead (DoD) celebrations in the United States is said to have begun in Tucson and Los Angeles in 1990 and by 2010 had spread to several more cities including the Midwest. Many Latin American countries hold similar observances for the dead as well as some Asian and African cultures.
The spirits of the deceased are thought to pay a visit to their families during DoD and the families prepare an altar for them. The altar is used to hold offerings, or ofrendas, for the departed. Their favorite foods, photos, and mementos are often placed on the altar together with items the deceased enjoyed:  toys, candy, liquor, hobbies, etc. A bar of soap, towel, bowl of water and other grooming items are traditionally left at the altar with the belief that the dead have been on a long journey and would like to refresh themselves. Pan de Huevo in the shape of skulls and pumpkin candy are often enjoyed at these commemorations.
The four elements: wind, water, earth and fire are represented on the altar. Wind is sometimes signified by papel picado that moves in the breeze. Candles depict fire, food represents earth, and liquids represent water. The cempasuchitl (Mexican Marigold) is an Aztec tradition, which says that the twenty-petal flower attracts souls to the altars.
In the last ten years, Day of the Dead celebrations include both traditional and political elements, such as altars to honor the victims of the Iraq War. There are updated, inter-cultural versions of the Day of the Dead such as the event at the Hollywood Forever Cemetery.
Whichever way you honor your loved ones and those who have departed, may you have a memorable Dia de los Muertos.
*The photo came from article written by Bernice Olivas. Visit her column and read her story “Santiago” on her first Dia de Los Muertos in Idaho–it’s pretty darn good.