Five years after my youngest became a vegan, I now have another vegan son who has a wonderful girlfriend who is also vegan.

I began cooking vegan style for the youngest some time ago. My oldest son, David and his girlfriend, Laura ‘veganize’ all sorts of foods while educating people on their YouTube site titled “Hangry Vegans.” Their videos show their adventures shopping and creating vegan dishes. Recently, they created a Wix site, you guessed it: “Hangry Vegans.”

We made five types of tamales. And, this year I wasn’t the only one making vegan tamales. David and Laura sat at the table and learned from me and his aunt about the ‘how to’s” of making the masa (dough) and filling for tamales without lard or animal products.

They tried to manipulate the butter knife, masa to oja (corn husk) ratio, and fill the tamales without making them into fat burritos. I was impressed they kept at it, smoothing and fixing the ojas, laying on the right amount of chile and ‘cheese.’

A mother is impressed when her daughter cooks, but a Latina mother is doubly surprised when her adult son tackles a medium difficult project. For the trifecta, Laura said she and David would keep up the tradition. Maybe there will be some little ‘tamales’ in their future 🙂 (I’m going to get an OMG from them, but I’m joking!).

They both did well for first timers and now know why we complain of backaches the day after tamale making.

My mother stood by and asked what type of filling we’d use. When the words “Black beans” and vegan ‘cheese’ entered the conversation she gave us the familiar nose wrinkle. This is her polite way of saying “Yuck.”

You know millennials, they video everything. Here are the steps in motion:

Mix together in a large bowl and add:
1 1/3 cup of vegetable broth

In another bowl, use
2/3 cup of coconut or vegetable shortening.
Mix until fluffy. Add this to the dry ingredients and stir until batter is smooth.
Knead the dough like bread until it’s smooth and slightly sticky.

You can also buy store-bought masa at a Mexican supermarket. Ask for masa sin preparada (not prepared with lard). To this masa add the vegetable shortening and knead.

Spread a thin to medium layer of masa on the oja/corn husk, leaving 1/4 from the top clear.

Add a tablespoon or more of drained and rinsed cooked black beans, shredded vegan Monterrey style Jack cheese, and diced green chiles or strips of chile. A teaspoon of salsa verde or salsa roja can also be added.

Fold each side of oja to the middle and fold over the top of the oja. Press the open ends of the oja gently together.

Take a deep pot (tamale) which has a steamer bottom or put an overturned foil pie pan with four ventilated holes at the bottom of the pot. Add water until it reaches the rim of the pie pan.

Wet and wring out a clean cotton kitchen towel. Drape it over the top of the stacked tamales, put a lid on the pot and place on the stove, at medium heat. Add water when necessary.

Set a timer for 90 minutes. Use a potholder to lift the lid and check the tamales. The masa will be cooked solid if it’s done. If the masa is mushy, set the timer for another hour.

Any vegetable filling can be used: lentils and corn, spinach and vegan cheese, peas and carrots, butternut squash are some examples.

For our sweet tamales recipes: Pineapple, Coconut; Cinnamon Raisin; and Strawberry go over to Hangry Vegans website. Check them out, they’re so cute.

Warmer weather has me thinking of summer. Summer, when I was a kid. A long time ago.

We were poor in funds, rich in family, and too young to know or care that some kids went away to summer camp.

We camped too, by the river or at Salton Sea (my least favorite place), sleeping on blankets inside or outside a tent—if there was one.

I don’t know if there is such a thing as a ‘memoir’ poem, but my nostalgia for the summer days of childhood brought these words:

a seat in the circle of camping chairs

Stories among the songs of long ago

smiles of contentment while

What do you remember of your childhood summers?

Spring has sprung and flung the blanket of gloom from my shoulders. I’m excited!

If you’ve followed my posts, you know that I’ve been in the valley with some serious family problems, relationship issues, and missing my two YA kids who live in Colorado. I was in sad poetry mode.

The great news is that my brother came out of the hospital, on his own two feet, after three weeks. He needs almost around the clock care, but that’s okay, the family is there for him and he gets a little better every day.

I just returned from visiting my YA’s and they are getting along like a grouchy married couple, much to my son’s chagrin. I had to do some counseling with the both kids.

The recurring snow, distance from family, jobs and college is getting to them-they are banking on a vibrant spring to ease their frustration.

My relationship issue is now a moot point-it ended. I’m doing my best to let this go.

We all go through tough times. It’s a given in life.

Through this past episode I tried to remember to be grateful. After listening to meditation music on Pandora, to help me sleep, I’d list five things I was grateful for that day.

During my first rough week,  a good cup of coffee was the best thing on the grateful list.

On the third week I had a very pleasant surprise.

My Young Adult novel made it to the second round of the Amazon contest. Out of 10,000 entries, two thousand were selected for second round.

Yes, I did the silly big grin for a few minutes while my mind said, “WHOOP-WHOOP!”

On April 14, 2014, the Third Round announces the top 500 entries selected for the Quarterfinals.

There is much to look forward to in April, besides the third round of Amazon’s contest. I’ll travel to Albuquerque, New Mexico for the Gathering of Nations Pow Wow and then on to Taos and Santa Fe, N.M.

Spring is blossoming, health is restored, there will be new beginnings, maybe opportunities for my novel, and exhilarating places to visit. 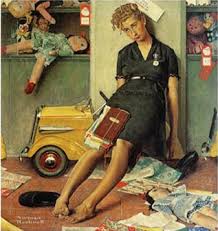 Have you had enough of circling the parking lot, standing in line, and walking the mall for Christmas gifts yet? The Norman Rockwell up there is from his Christmas series and was the first to feature a woman, solo on the cover. It is 1947. Yes, I know, things haven’t changed that much. Is that the gift list or family budget falling off her lap? Whether ’47 or 2011, many woman look like that around December 22th. Then they need a second or fourth wind to make Christmas cookies.
I avoid going to the mall because for me, it’s a waste of gas, precious time, there are too many germs out there and I’m slightly claustrophobic. I’m a Cyber Monday shopper, online, all the time, all the way. People on my list, that’s in my head, will receive books, jewelry, telescope, Groupon coupons, and cologne. And I didn’t get all of these at the mall.
One of my favorite things to shop for, on and offline, are books. I  love books. It’s also the reason I took a dip starting a ‘nano-bookstore,’ in the old downtown section of my town. It’s a consignment area in a historic Colonial Revival building. A young entrepreneurial opened this old building for handmade items and made an exception for books (she is a fella book lover).
Books make the best gifts for Christmas, Hanukkah, Kwanzaa, any holiday and just because. I often wished for a new book at Christmas and would take that over any piece of clothing my very thoughtful but fashionably hindered mother bought for me.
Children’s books are a favorite because they are dual purpose. It’s a gift to a child when they read it and when you read it to them (over and over). It’s not only in the reading, but also in the readers characterization of what is read, the child’s enjoyment, and the conversations that arise out of the reading. Children’s books equal family time, snuggling, and smiles.
A holiday favorite, “The Night Before Christmas,” is in a new paper-cut version. It’s a beautiful book with an old Victorian feel. It’s a gorgeous book and you have to be careful with the delicate pages that are paper-cut. Although my kiddos are teen/YA kids I’m purchasing just for the quality and beauty of the item. We have four books on Christmas that we put out each year: Olive, The Other Reindeer; The Legend of the Poinsettia and Night of the Posadas by Tom DePaolo and Too Many Tamales by Gary Soto.

For the teenager, think about their hobbies and passions, and find a book in that genre. Choose a business book for the young professional, the small business owner, the entrepreneur, the mid-life looking for another profession, and the soon to retire but not gone person. For the great, or not so great, but loves to cook what is better than a cookbook. For those who want to learn more about spiritual matters find a Christian/Buddhist/ (insert persuasion here) fiction or nonfiction book. Everyone on your gift list has an interest or passion and it’s up to you to find it.
A one-stop source for perusing the vast mountain of books out there is this list from the Los Angeles Times. There are books on autobiographies, coffee table, cooking, fiction, mysteries, non-fiction, poetry, quirky books, sci-fi, thrillers, unusual, and books for young adults.
So take off your  jacket, put down your heavy purse with stuff  hanging out of it, slip off your shoes, and go hang out on the couch for fifteen minutes. Or you can go find a candle or three (yes, the ones you use for decoration that have dust on the top of them). Now run warm bath water and light the candles. Can you feel it? The kinks in your shoulders and neck will relax after five minutes. Sorry, that’s all you get if you have little kids. Seven minutes if the spouse watches them, and fifteen if they are napping.

Now that you’re relaxed, find the ace bandage and wrap your wrist. It’s time to go cyber shopping (before December 10th for free shipping at the big online stores). Save your feet and mind to enjoy watching a holiday program, the lighting of your city’s Christmas Tree, enjoying a Peppermint Mocha with your friends or making those Christmas cookies you promised the family last year. Many happy Holidays.